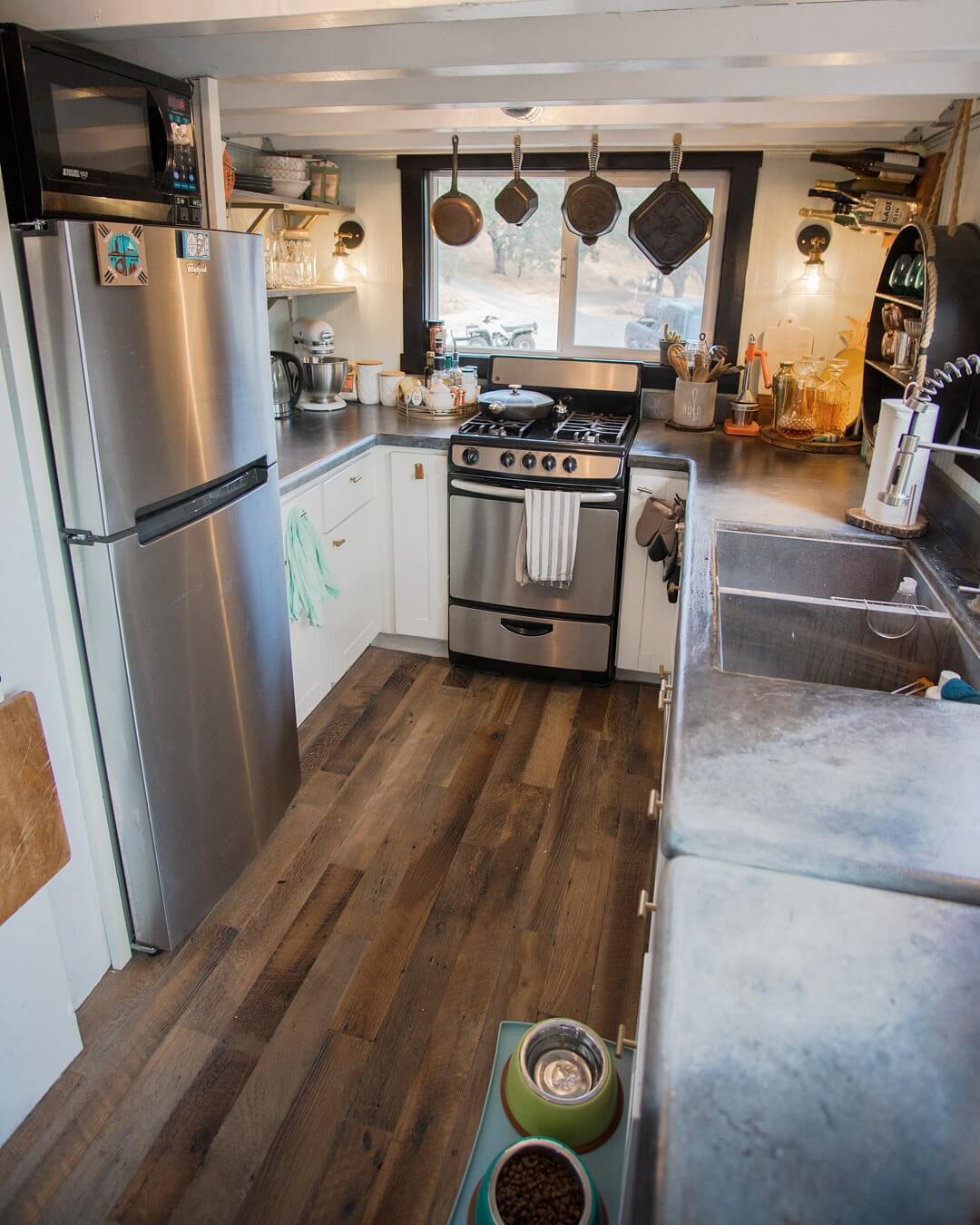 One of my biggest fears when moving into a tiny house was the size of the kitchen and actually cooking in it. Being someone who enjoys cooking as well as entertaining, A number of questions would continually pop into mind while we built as to what would fit? what items would be practical for daily cooking? as well as how to manage some less used entertaining ware? 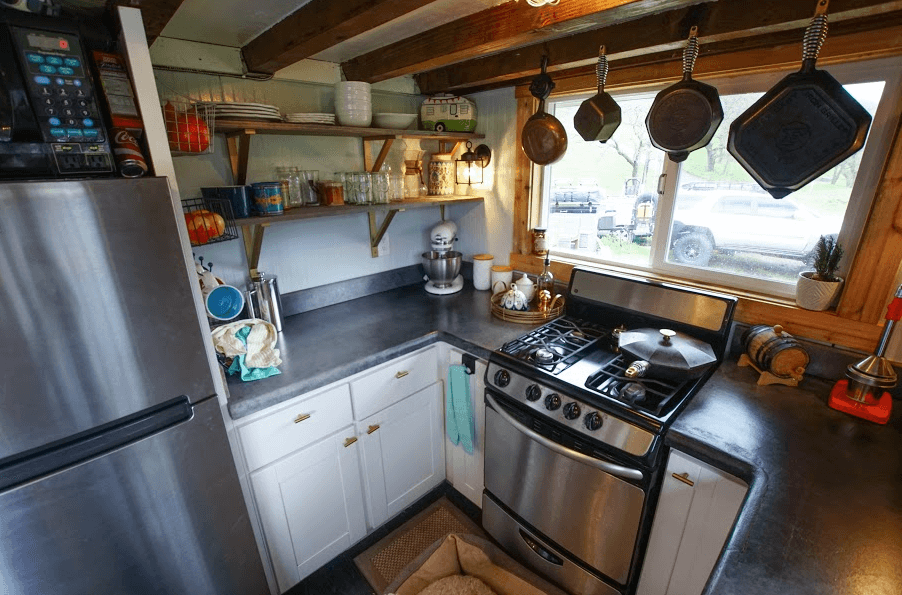 For those who enjoy cooking and do it as regularly as I do, we know how much equipment cooking can come with! In the planning stages while downsizing and still in our big house, I had to get real and consider what I used on a regular basis and to be honest about what I didn’t. That was tough! However, when I opened those cabinets, I realized I had a ton of cooking and entertaining items I hadn’t touched in probably a year or possibly more. While I did get rid of a lot, I did not get rid of everything. Instead I boxed up the things I knew for sure I would use on a daily basis and then separately boxed the items I loved and couldn’t part with but weren’t used quite as often. These items would be stored in airtight storage   bins that we would keep under the tiny house (or as we like to call it “the cellar”) when not in use. Every few months we would evaluate what was stored and if we did not use it, we would get rid of it. Now almost 3 years later we have nailed down what we actually use and what we don’t and have downsized the storage under our tiny house drastically except for seasonal cooking gear, bbq items. We then kept only the essentials are in the kitchen.

Well now, How do we like cooking in a tiny house and has adapting been tough? 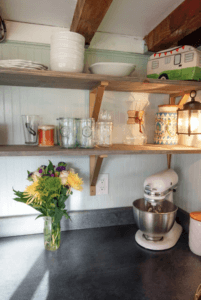 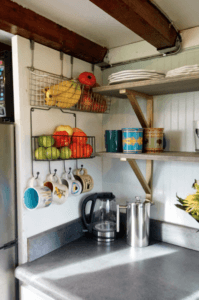 We were pleasantly surprised that adapting to the kitchen space and cooking in it has surprisingly been very easy! A few reasons why:

SIZE OF THE KITCHEN. A smaller space does not mandate what you actually use and need. Get down to the basics. While I still have a good amount of cooking and kitchen ware, our kitchen is not jam packed like it was in our big house. When space is precious, we really evaluate what items are actually important as opposed to filling the space just because we have it.

PROXIMITY. As for actual cooking in the tiny house, I love it! It’s so much easier having everything in close proximity while cooking. Our kitchen is a U-shape allowing for 2 people to comfortably work and then another two areas to prep. This doesn’t even include the bar below the accordion window. 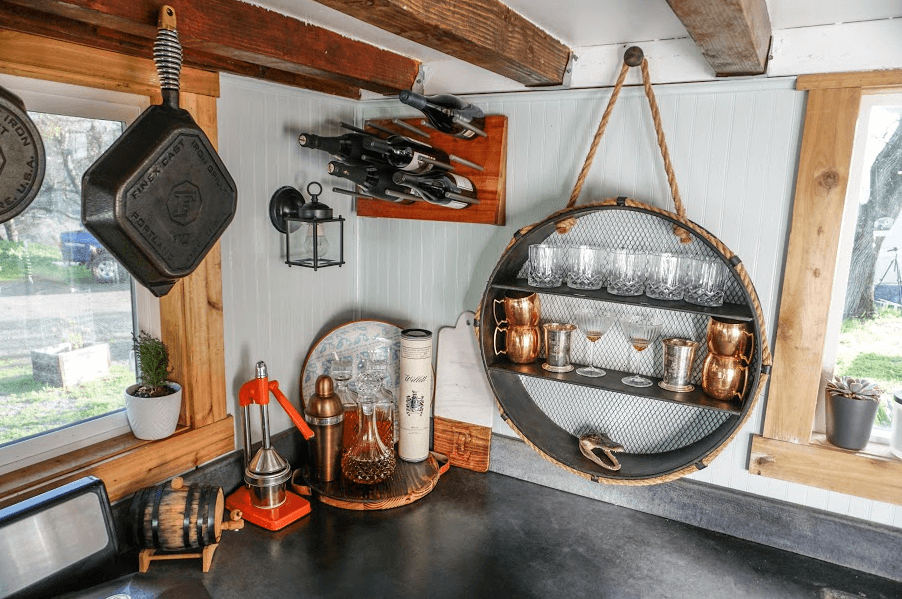 SEASONAL STORAGE. Having some cooking items we use less often separate and out of the house in a storage bin under the tiny house has been great. I go through spurts of cooking with different methods depending on the season. For instance BBQ cookware or large pots for soup and baking ware are used for more often in fall and winter. It would be irrational to just get rid of and re-purchase new items seasonally. So having an outdoor storage bin for seasonal items has worked wonderfully! 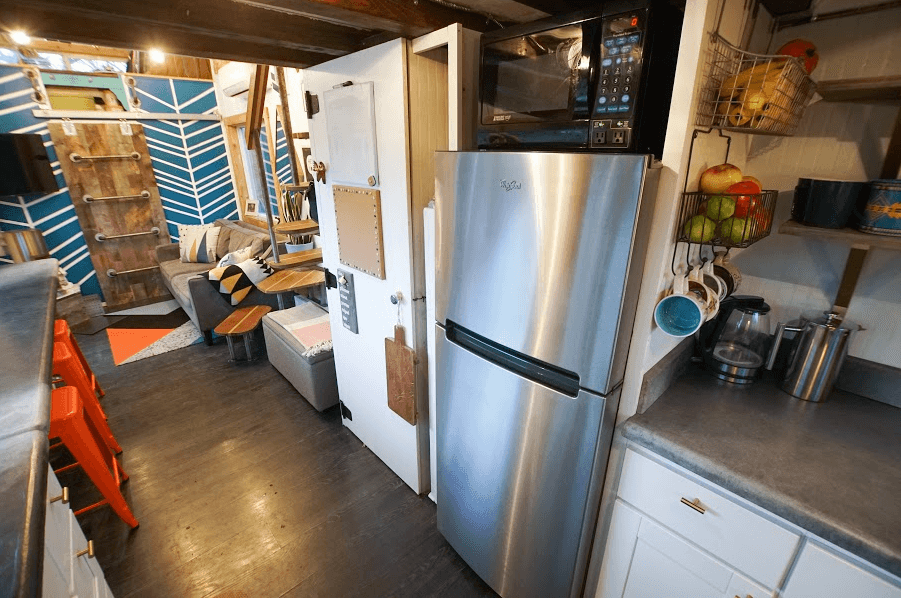 DESIGN. The biggest key to a comfortable and pleasant tiny house cooking experience is the designing of the kitchen space. This was an area I was unwilling to compromise on. Having a full U- shape has been great! We have zero regrets of it being the size it is. The heart of a cook’s house is the kitchen whether it be a large or small space. Everyone still crowds in it to be near the food. I actually enjoy cooking in this space much more then I ever did our big house. 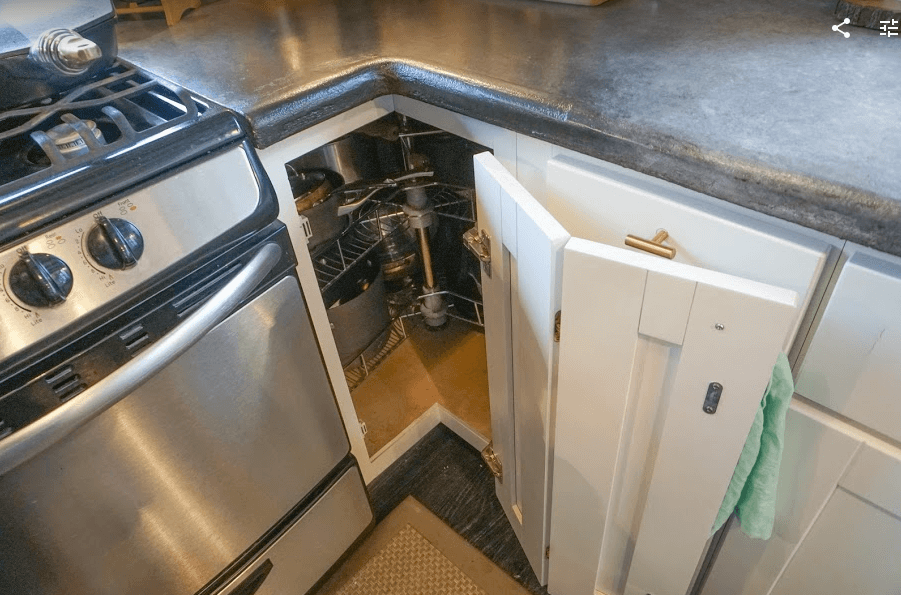 HIDDEN STORAGE. Some key things that have helped keep our kitchen organized is the Lazy Susan in the lower corner cabinet that holds and hides so much! We also have a good amount of lower cabinets and decided to go with open shelving for the plates and glassware. It avoids a closed in feeling that upper cabinets can cause. It also helps keep those items organized verses cramming them in a cupboard. For food storage we have just been using one small tall and narrow pull-out drawer as well as space above the refrigerator. 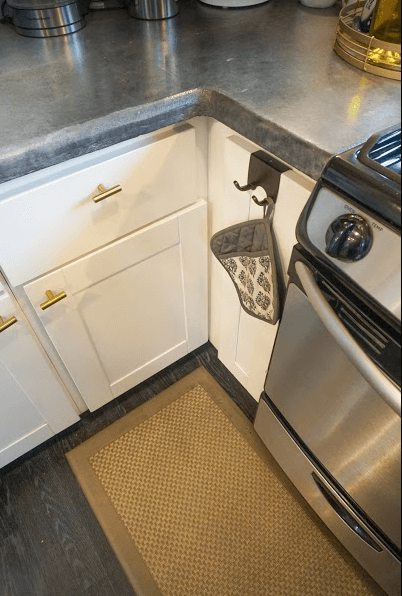 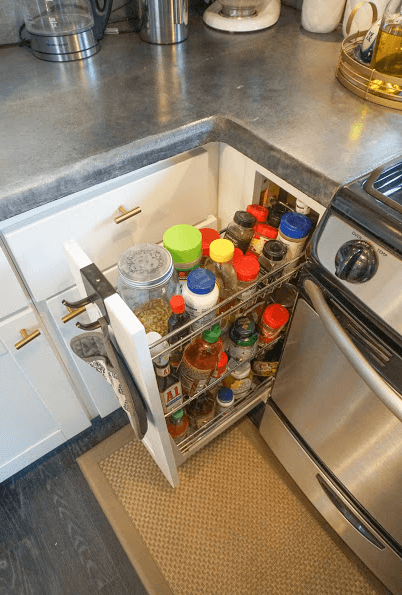 We’ve been surprised as to how much dry food we’ve been able to store in these smaller spaces and how we’ve managed just fine with it. However, we later added a smaller proper pull-out pantry of drawers in our open space between the refrigerator and utility closet. One of the fun things about a tiny house is figuring out a perfect spot for every little thing! With space being small we like to work and live in it for a while before we make any big changes to make sure it will suit our needs. We have now lived in our tiny house for enough time to know what little things do and don’t work for us. 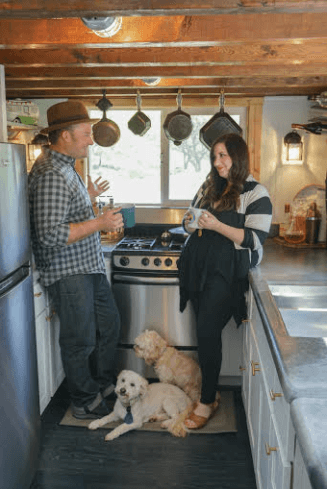 For daily cooking the space we now have seems to be the best shape to suit our cocktail/cooking combo. It’s especially nice that one full end of our house is kitchen and we don’t have to worry about a passerby while preparing dinner like we would have had to with a galley kitchen. Another advantage to a full U-shape over a galley would be having the bathroom on the opposite end of the house. While entertaining and hosting friends, having people squeeze through the kitchen and then having to deal with the sounds of the bathroom would kill the cooking buzz. For many reasons we chose to have the kitchen and bath very separate from one another on opposite sides of the house. The primary advantage to our kitchen though is that we planned how we would use the space and how we would function it in. We’ve been extremely happy with the outcome. It goes without saying that one of the many fun things in designing a tiny house is being able to customize it to each person’s specific needs. What works for some won’t work for all. Being reasonable and realistic in the process of downsizing is key, but always remember to have fun with designing your space to your needs and remember that one size
does not fit all!

To find more Tips, Tricks and Secrets to living well on a small scale, pick up a copy of our best selling book: 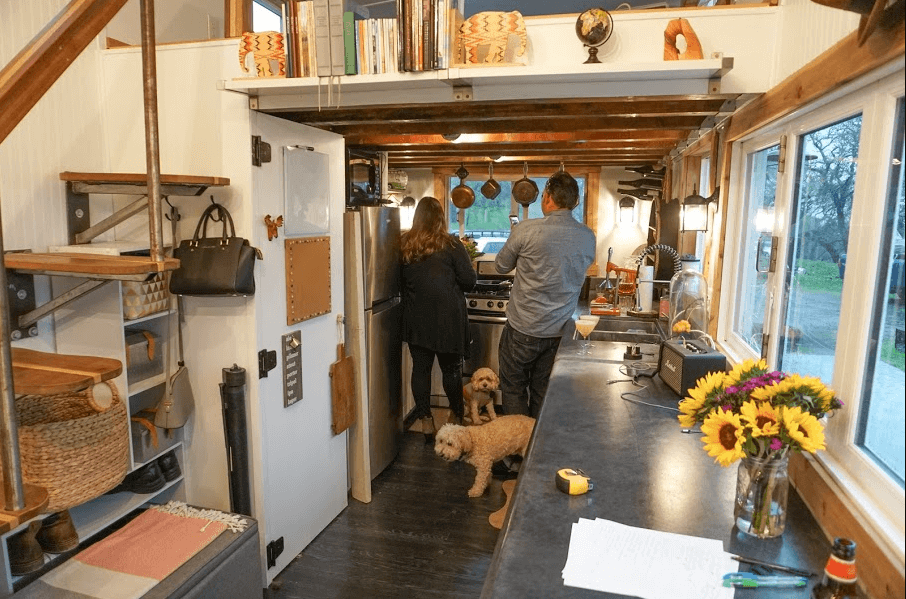 🔸We Build Custom Tiny House Trailers
🔸For You To Build a Tiny House On
🔸Plus Shells, Plans & Best Selling Book
Click Link for A Custom Trailer Quote

What are your thoughts on stairs versus ladders in

Take a Peek at our Tiny House Bathroom! We changed

Day or Night, we have an outdoor space that we can

Tiny Houses On Wheels are now Legal in San Diego!

Our master loft has been comfy and cozy for the pa 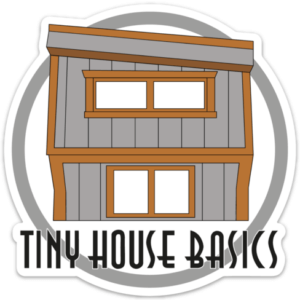